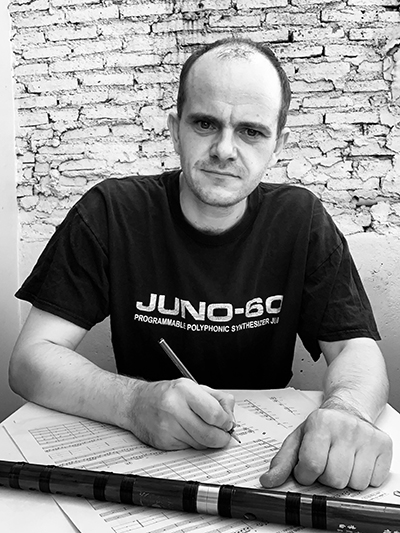 Peter Mayne is an award winning film and television composer, whose music has been used on programs and commercials across the globe. His clients have included, BBC, ITV and SKY, and works of his have be recorded by the Royal Philharmonic Orchestra. Recently his work on “Elsa and the Ariel dancers” saw him win platinum for best original score from the Royal Wolf Film Awards.

To date, television shows he has worked on include: "Paul O'Grady: The Sally Army and Me", "Land of the Midnight Sun" and "I Never Knew That About Britain". He has also written for 55+ commercials for charities such as; Save the Children, Plan, Concern, Action Aid, Sightsavers and Friends of the Earth amongst others.

Peter has specialist knowledge of Logic Pro, Sibelius and ProTools and his studio setup includes all the top sample libraries and virtual instruments enabling him to create professional quality orchestral mock-ups, through to experimental electronic music. His studio also has a wide variety of electronic music instruments, including original Moog and Roland Instruments along with more up-to-date eurorack synthesisers, and a vast array of software electronic instruments.

In addition to his own work, Peter has worked closely with fellow composer David Arnold over the last twelve years, on projects such as the BBC's 'Children in Need' and production music library albums for SKY and Universal.

As well as commercial work, Peter is a professor of Electronic Music at the Guildhall School of Music and Drama. He has also pursued various non-commercial projects such as an interactive music and image installation at the Edinburgh Festival, and also develops audio and electronic music software and hardware.