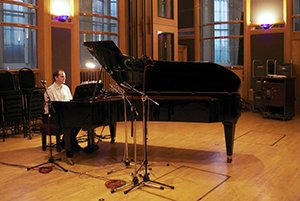 Peter Mayne is a film and television composer, whose music has been used on programs and commercials across the globe. His clients have included, BBC, ITV and SKY.

To date, television shows he has worked on include: "Paul O'Grady: The Sally Army and Me", "Land of the Midnight Sun" and "I Never Knew That About Britain". He has also written for 40+ commercials for charities such as; Save the Children, Plan, Concern, Action Aid, Sightsaversand Friends of the Earth amongst others.

In addition to his own work, Peter has worked closely with fellow composer David Arnold over the last nine years, on projects such as the BBC's'Children in Need' and production music library albums for SKY and Universal.

As well as commercial work, Peter is a professor of Electronic Music at the Guildhall School of Music and Drama in both junior and senior departments. He has also pursued various non-commercial projects such as an interactive music and image installation at the Edinburgh Festival, and also develops audio and electronic music software and hardware.